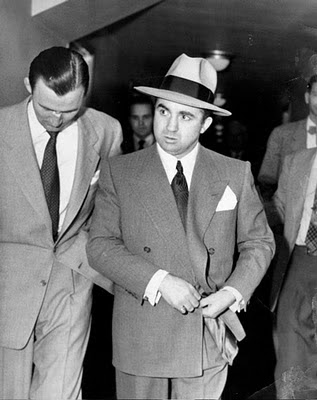 Just finished reading Tere Tereba's Mickey Cohen: The Life and Crimes of L.A.'s Most Notorious Mobster (ECW Press). It filled a gap in my education, which is pretty good on Los Angeles and mob history, but I didn't know much about Cohen, who succeeded his mentor Benjamin "Bugsy" Siegel as a central player in the post-war Los Angeles rackets.

Tereba's portrait stresses Cohen's Boyle Heights roots, his shortlived boxing career, his obsession with cleanliness, and most of all his appetite for publicity, which distinguished him from his underworld peers. Cohen absorbed his native city's lust for the limelight, and he paid the price for it. He appeared before the Kefauver Committee and was later subpoenaed for the McClelland hearings. His cagey answers earned him a new enemy, committee counsel Robert Kennedy. In 1961, after Kennedy became U.S. Attorney General, Cohen was convicted of tax evasion and given a 15-year sentence starting at Alcatraz. During his ten-year prison stint, he was brutally attacked and disabled. He was freed in 1972, but the Sunset Strip he had once commanded had turned into a hippy scene that couldn't have been less interested in an old-school mob figure like him. By this time, of course, Nixon was president, and Bobby Kennedy had been killed at the Ambassador Hotel. Divorced, out of the action, and battling stomach cancer, he tried to cash in with a memoir during the Godfather era. He died in his sleep in 1976.

The book's main strength, I think, is the way it uses Cohen's experience to sketch the larger Los Angeles underworld and demimonde of that period. Interesting enough in his own right, Cohen is also a perfect delivery system for this portrait, largely because of his long tenure. His friends, associates, and adversaries included not only Siegel, but also Jack Dragna, Johnny Rosselli, Johnny Stompanato, and Jimmy Utley as well as writer Budd Schulberg, screenwriter Ben Hecht, super lobbyist Artie Samish, actress Lana Turner, Frank Sinatra, and a young Richard Nixon, whose campaign manager tapped the mobsters he had defended in court. Cohen also had connections to racketeers in Cleveland, Chicago, and New York, including Frank Costello and Meyer Lansky, Siegel's former partners in Las Vegas. And one of Cohen's crew was Stumpy Zevon, father of musician Warren Zevon.

I turned on L.A. Confidential last night and remembered that James Ellroy used Cohen to get that story going. Cohen may have achieved a kind of iconic status in Los Angeles, but I found relatively little too admire in his character, even by underworld standards. Yet I enjoyed and learned a great deal from Tereba's up-tempo, well-turned biography.
Posted by Peter Richardson at 8:44 AM