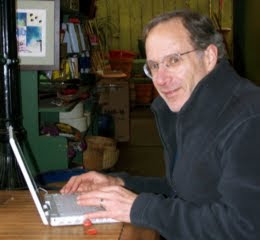 My colleagues and I at the California Studies Association were shocked and saddened to hear that Jonathan Rowe passed away suddenly last week. He was 65.

I met Jon on the CSA steering committee. Our 2007 conference on the crisis of the California commons intersected with his work at the Tomales Bay Institute in Point Reyes, where he also hosted a public affairs program on KWMR.

Over the next few years, I appeared on the program twice to discuss my books. I also guest-hosted when Jon was out of town, joined his local pick-up basketball game, and visited him and his family at their home. He was damn good company.

I'm not familiar with every aspect of Jon's work, but he was extraordinarily productive and versatile. He grew up in Boston, was trained as a lawyer, and worked for Ralph Nader early on. He also served as a congressional staffer and wrote for the Christian Science Monitor, American Prospect, Washington Monthly, and many other publications.

Jon did all of his own thinking, wrote beautifully, and was a shrewd observer of people and politics. "The Language of Strangers," his 2008 piece on community journalism in West Marin, is a minor masterpiece.

You can also see Jon's genius and originality in the Senate testimony he gave a few years ago; some of it appeared in the June 2008 issue of Harper's magazine under the title, "Our Phony Economy."

Jon's friends are putting together a website with more of his work--190 articles now and counting.

Last weekend, Jon went to the gym and came home feeling bad. That night, he had a high fever and went to the hospital. He died the next morning. Frankly, it's hard for me to fathom, but I wanted to make sure I honored Jon by calling attention to his life and work.
Posted by Peter Richardson at 12:07 PM

That's terrible news. We had some really wonderful conversations together. Jonathan was such an inquisitive person, somebody whose drive for justice and fairness really animated his whole self. Though I didn't know him much beyond the professional, I do know that he was a parent and husband, too. My heart goes out to his whole family tonight on their loss.